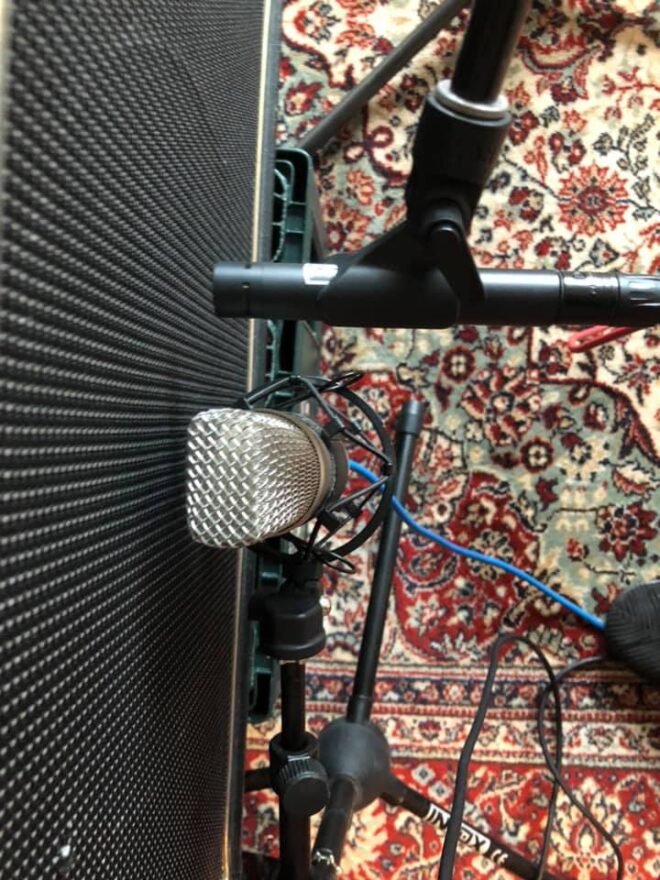 My band Ink Bomb releases an acoustic cover every year around Christmas, where all proceeds are donated to a charity. The Netherlands have been in lockdown for a few weeks and we could not play together, but we could still record something. That’s why we decided to do an extra edition of our charity-acoustic-cover-thing. This time, I wanted to try something different with the guitar sound.

I’ve seen a lot of articles and saw a lot of video’s about how to record an acoustic guitar. There are generally two ways of doing this: put a mic in front of the guitar or plug the guitar into a DI. The last option is only possible if you have a pick up in your guitar of course. There are up- and downsides to both of these techniques.

When using a (condenser) microphone on a guitar, just must be absolutely certain that the guitar player doesn’t move around to much. If you are recording yourself, this becomes problematic. Let’s say you play a take and you are not happy with a certain part. When you want to overdub this part, your position in the next take has to be very similar otherwise the overdubbed part sounds different.

Another problem that I often have with micing up a guitar is the extra noise. Tapping your foot, heavy breathing, it all get’s picked up.

Plugging your guitar straight into a guitar does’t cause any of the problems listed above. You will always sound the same no matter how many takes you do. But there is an obvious downside. The guitar will have a very heavy attack, especially if you are playing with a heavy pick (like me). The recording will be very spikey and taming these dynamics is very hard. You will need a very fast, clean sounding compressor like the Fabfilter Pro-C 2 or something similar. You also have to smooth out the highs, which is harder than it sounds. In other words; when DI-ing a guitar you will need to do some extra work afterwards.

Recording through an amp

I also wanted the guitar to sound wide. The song won’t feature any other instruments other than vocals so I needed to fill up the stereo field with the guitar. I put my Rode NT-1 right on the cone of the speaker. This was my bright mic. The other mic is a Slate ML-2 which can emulate different mics. I used the FET-47 emulation. This way my dark mic. I panned both mics to 60% on both sides. This gave a really cool and unique sound that didn’t need much else. I did boosted the top end quite a bit since it was becoming a bit too dark.

After the guitar was recorded I added some electric guitar using the exact same set-up. I changed the Slate emulation to the regular 67 for that.

Recording an acoustic like this doens’t sound like recording with a mic. It’s a different sound so it’s not a replacement for that technique. However, it will give you another option on how to record a guitar.